In Tim Jordan and Harry Lumley, Brooklyn Superbas fans had a terrific power combination in the lineup for a brief time. 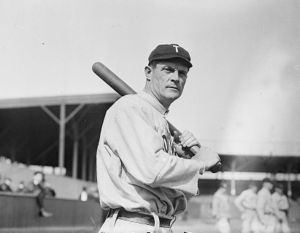 The tall, handsome, and muscular Jordan came up originally at age 22 for six games in 1901 with the Washington Senators and then two more in 1903 with the New York Highlanders. When he finally became a regular in 1906 with the Brooklyn Superbas, he was 27.

In his first full season, he led the league in home runs, was fourth in RBI, and sixth in slugging percentage. His teammate Lumley, two years younger, led the league in OPS+, and fans thought they had the core of an emerging great team.

After the season, he signed a seven-year contract.

He led the league again in home runs in 1908 with 12, and his .247 was the highest on a team in the depths of the dead ball era that hit .213 (the entire league hit .239). He became the first person in the 20th century to hit a home run over the fence in Exposition Park in Pittsburgh.

By 1909, Lumley was the manager and playing very few games, and Jordan played only 103. Knee problems were to curtail his career. Even so, his .273 batting average was highest on the team, and his 3 home runs were # 2 on the team.

In 1910, both Jordan and Lumley ended their major league careers very quickly, as Lumley appeared in only 8 games, while Jordan was in 5 games.

Jordan is the only player in Dodgers franchise history to lead the league in home runs more than once (1906 and 1908).

After his major league career he continued to play for years in the minors. He spent parts of five seasons with Toronto. In at least 1911, 1912 and 1914, he led the Toronto team in home runs.