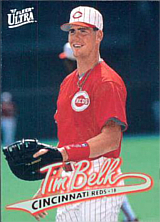 First baseman Tim Belk played nearly a decade in the minors and had a brief taste of major league ball.

Originally selected by the Cincinnati Reds in the 15th round of the 1992 amateur draft, Belk began his pro career that summer with the Billings Mustangs, hitting .286 with 12 homers and earning a spot on the Pioneer League All-Star team. With the Winston-Salem Spirits the next year, he hit .306 with 14 homers while leading the Carolina League with 156 hits. With the AAA Indianapolis Indians in 1995, he hit .301 in 57 games before being hit in the face by a ball and missing the remainder of the year. Belk spent most of 1996 back with Indianapolis, clubbing a career-best 15 home runs. He briefly reached the majors with the Reds midway through that season, hitting .200 while getting into 7 games. After going back to the minors, he was dealt to the Detroit Tigers for Kevin Baez prior to the 1998 season, missing much of the year due to a wrist injury. Following his playing days, he founded the Belk Baseball Academy in Houston.