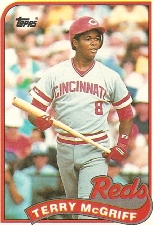 Terry McGriff was signed as an 8th round pick in the 1981 amateur draft by the Cincinnati Reds and scout George Zuraw.

McGriff played six seasons in the major leagues as a catcher. His father had been a catcher and had roomed with Lou Brock in college. Terry was a quarterback and a catcher in high school. He had a reputation in the minors as a top defensive catcher. After his major league days, he played in Mexico in 1997 and with the Bridgeport Bluefish from 1998-2001.

McGriff was the hitting coach for the Bluefish from 2003-2007 and bench coach for the team in 2009-2011. He is a cousin of Fred McGriff and the uncle of Charles Johnson.