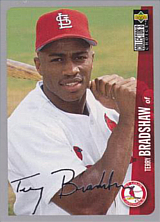 Outfielder Terry Bradshaw played for the St. Louis Cardinals in 1995 and 1996, batting .262 in 34 games. After retiring as a player, he became a minor league coach in the Kansas City Royals organization. In 2018, he was named the major league team's hitting coach.

He is not to be confused with Terry Bradshaw, quarterback for the Pittsburgh Steelers in the 1970s and 1980s and winner of four Super Bowls.