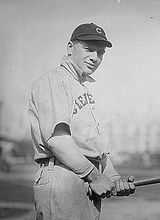 Catcher Ted Easterly hit .300 in the majors, no easy feat for a player during the dead ball era. He was twice in the top ten in batting average in the American League and once in the Federal League. He was a top pinch-hitter in 1912 and 1913.

Easterly also played six seasons in the minors, mostly for Los Angeles. He had the highest batting average among the regulars of the 1908 Los Angeles Angels.

After baseball he was a carpenter.

The New York Times of January 23, 1910 had an article about the influx of Californians into major league baseball. Easterly was listed as part of a team of Californians that "would prove a strong aggreggation."