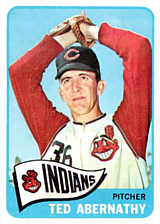 "[Ted] Abernathy was a dandy. A family man, minded his business, easygoing. We roomed together for a while and got along great. He threw underhanded and threw good but gave up a lot of hits and walks." - Pedro Ramos, from Danny Peary's 1994 book We Played the Game

"Although now and then an inglorious Milton unmutes his poetic urge in these names, labeling Ted Abernathy 'Angleworm' because he pitches underhand and his stuff seems to rise out of the ground..." - Tristram Coffin, from Baseball Nicknames

Ted Abernathy was a premier reliever and two-time Sporting News Fireman of the Year. He saved 149 games while pitching 681 times over parts of fourteen seasons.

Abernathy broke into pro ball in 1952, going 20-13, 1.69 with the Class D Roanoke Rapids Jays and leading the Coastal Plain League with 293 strikeouts in 255 innings. He missed much of 1953 and all of the 1954 season due to military service during the Korean War. When he returned it was as a big leaguer, joining the Washington Senators for Opening Day in 1955 with uninspiring results. Ted saw limited action in the next two years, 1956 and 1957, then after spending time in the minors, made a two-appearance, 12.00-ERA cameo back up in 1960. In between, in 1959, after undergoing shoulder surgery, he proceeded to change his throwing motion to a submarine delivery in an effort to keep the dream alive. Apart from the aforementioned two-game stint, he spent all of 1958 to 1962 in the minors before the Cleveland Indians took a chance on him, calling him up around Memorial Day in 1963.

In his after-playing days, Abernathy worked for his son's landscaping business, among other ventures. He died in 2004 after suffering from Alzheimer's disease for several years.