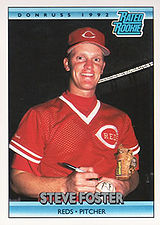 Pitcher Steve Foster was signed as a 12th round pick in the 1988 amateur draft by the Cincinnati Reds and scout Chuck LaMar.

After his playing career ended, Foster was a Tampa Bay Devil Rays scout in 1996. He spent the next two years as an assistant baseball coach at the University of Wisconsin-Stevens Point. In 1999 and 2000, he returned to scouting for the Devil Rays before spending the next two years as the pitching coach at the University of Michigan. In 2005 and 2006, he was pitching coach for the Greensboro Grasshoppers. In 2007, Foster joined the Florida Marlins as the club's bullpen coach. In 2010, he took over the same role for the Kansas City Royals, staying until the end of the 2012 season. After being a minor league pitching consultant with the Atlanta Braves in 2014, he was named pitching coach of the Colorado Rockies in 2015, staying in the unenviable job until the end of the 2021 season. Rockies' pitchers actually put up some impressive stats in spite of the hostile environment during his run, and as a result the Rockies were able to make it to the postseason on a couple of occasions even if they were still unable to win a division title.

He also works as a pitching instructor at the Elite Baseball Academy which operates baseball clinics in the Midwest.