Note: This page links to 1980s major leaguer Steve Brown. For the Colombian outfielder who played in the minors in the 2000s, click here. 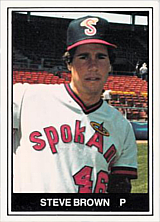 Pitcher Steve Brown played briefly with the California Angels in the 1980s.

Brown attended UC Davis, where he recorded 23 wins over four years. In 1978, he won 11 games with a 2.94 ERA and 83 strikeouts and was named Far Western Conference Pitcher of the Year. Later that year, he was signed by the Angels and began his pro career with the Idaho Falls Angels, going 7-3 with a 2.82 ERA in 14 games. Brown reached the majors with California in 1983, starting the second game of an August 1st doubleheader against the Minnesota Twins and taking the loss. Overall that summer, he went 2-3 with a 3.52 ERA in 12 games for the Angels. He was a member of the Angels' rotation to start the 1984 season but gave up 11 earned runs over 11 innings of work in 3 starts and was soon back in the minors. He spent his final pro season in the Montreal Expos organization in 1985.

Brown was inducted into the UC Davis Baseball Hall of Fame in 1999. He was the school's first player to reach the major leagues.