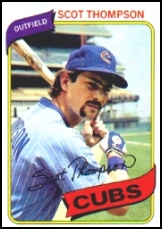 Scot Thompson had one of the most picture-perfect swings in all of baseball, just not the results. The fact that his swing was likened to that of "Sweet-Swinging" Billy Williams was not lost on Chicago Cubs fans when Thompson hit .417 in a September 1978 cup of coffee. Thompson followed with a very respectable .289 sophomore season in 1979. Thompson's performance at the plate then tailed off as a concussion further hampered him. Nevertheless, he ended his eight-year career with a .262 average for the Cubs, San Francisco Giants and Montreal Expos.