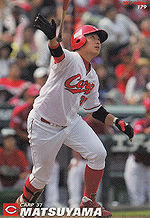 Matsuyama twice led the Kyushu Big Six University League in average, once in homers and three times in RBI; he hit .412 overall in college and set a league record with 112 hits. The Hiroshima Carp took him in the 4th round of the 2007 draft. He spent most of 2008 in the minor Western League, winning a RBI and hit crown. He made his debut with the big club as a pinch-hitter for Kan Otake and was retired by Jun Hagiwara. He struck out in his other bat that year. He spent all of 2009 and 2010 in the minors, playing the corner infield. He became a backup corner outfielder for Hiroshima in 2011, getting his first NPB hit off Kazuhisa Makita may 26 and his first homer June 9 against Hideaki Wakui. He hit .270/.299/.357 in 68 games that year.