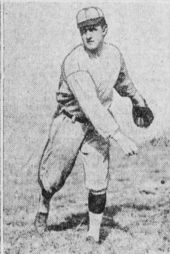 Jacob "Rube" Geyer pitched four years for the St. Louis Cardinals. Although he often started, the majority of his appearances were in relief. Immediately prior to his four years with the Cardinals, he had three years with the Columbus Senators, winning 20 games in both 1908 and 1909.

Wikipedia's article on him (viewed 03-26-20) states that his key pitch was the drop ball, citing The Neyer / James Guide to Pitchers.

Geyer's manager Roger Bresnahan used him very sparsely with the 1910 Cardinals. Sporting Life carried notices that Geyer had arm trouble, and eventually that it had been helped by X-ray treatment.

Geyer's father served in the Civil War and named his son after General Jacob Bowman Sweitzer, who gave the baby a christening mug. [1]