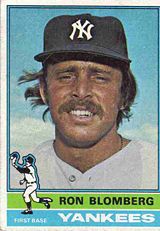 "To be able to play in front of 8 million Jews! Can’t beat it. I lit everyone’s candles for every bar mitzvah in the city. It was like I was related to everyone. They named a sandwich after me at the Stage Deli!" - Ron Blomberg, 2011

Ron Blomberg was the first overall pick in the 1967 amateur draft. In 1973, while playing for the New York Yankees, he became the first designated hitter.

On April 6, 1973, Ron dug in at Fenway Park against Luis Tiant and drew a walk in the first plate appearance for a designated hitter in MLB history. He had his most productive season that year, batting .329/.395/.498 with 12 home runs and 57 RBI in 100 games. Ron was prone to many injuries, only playing 461 games in parts of eight seasons. But he was able to post a career OPS+ of 140, which is considered Hall of Fame level (140 is the same as Duke Snider, albeit in a much longer career). Although never a "regular" (his 1973 season saw his most big league at bats, 301), he was a much better than average hitter - as his .293 lifetime batting average and .360 on-base percentage can attest.

In 2007, Blomberg was hired as one of the first managers in the Israel Baseball League. He won Manager of the Year honors after leading his team to the IBL title. It was Blomberg's first time in Israel. He had been invited in 1973 by Moshe Dayan and Golda Meir but the Yom Kippur War took place and Blomberg decided not to come. Ron now works as a scout for the Yankees in the Atlanta area. He is the author of the books Designated Hebrew and The Captain & Me and his website is Ron Blomberg.