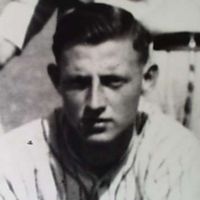 Roel de Mon was a legendary Dutch baseball player, who was said to be the fastest Dutch pitcher of all time. He triumphed between 1940 and 1947, when he gained the Hoofdklasse national baseball championship for four times with SC Haarlem and Schoten. World War II held back De Mon from international successes. He played only two games against Belgium, and one against an American/Canadian Army team in 1945.

In those days, an army officer who was a Major League manager in daily life, invited Roel de Mon to come and play in the USA. De Mon stayed in Holland to help building up the country after the war. [citation needed]

Roel de Mon’s notorious superfast pitching had a backside: it caused a serious injury to his right arm and he had to end his baseball career in the late 1940s, to become an early living baseball legend. Roel de Mon died in 1973 after serious heartfailure, only three days before his 54th birthday.

Since 1969, the Roel de Mon Award is given to the best pitcher in the Dutch junior league, which was called the Roel de Mon league till the late 1980s. Winners have included Marcel Kruyt, Harry Koster, Alexander Smit, Lars Koehorst, David Bergman and Kevin Heijstek.