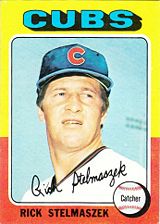 Catcher Rick Stelmaszek played eleven seasons of pro baseball, with cups of coffee in the majors in 1971, 1973, and 1974, playing with three different teams: the Washington Senators, who drafted him in the 11th round of the 1967 amateur draft and their successors the Texas Rangers, the Chicago Cubs and the California Angels. In all, he hit .170 in 60 games.

He began managing in the minors with the Wisconsin Rapids Twins in 1978, spending his first year there as a player/manager. He was named the Midwest League manager of the year in 1980. After three years at the helm of Wisconsin Rapids, he joined the Minnesota Twins coaching staff in 1981 and stayed through 2012. He was the team's bullpen coach under five different managers, but also took on other responsibilities, such as overseeing spring training drills and getting everyone organized. His 32 seasons as a coach with one team are the third longest such stint in major league history, and he had the longest tenure of any uniformed employee in Twins history.

He was diagnosed with pancreatic cancer in 2017 and the Twins honored him by having him throw the ceremonial first pitch on opening day that year. He passed away from the cancer after the season; he was 69.

His father Ray Stelmack, was a pitcher/outfielder in the New York Yankees chain.