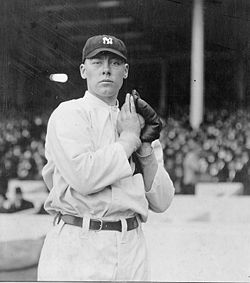 Ray Keating pitched seven years in the big leagues, appearing in six seasons with the New York Yankees, who were called the Highlanders when he first appeared with them in 1912. He also played for many years in the minors, of which nine seasons were in the Pacific Coast League and parts of six of these were with the Sacramento Senators. With Sacramento in 1928, he went 27-10.

Ray's time at Niagara University overlapped with that of Earle Mack. Ray left Niagara in 1912 and after going 26-11 for the Lawrence Barristers of the New England League, came to the majors that September. His best season with the Yankees came in 1914, when he went 8-11, 2.96 in 34 games, pitching 210 innings and striking out 109 batters. His final major league season, in 1919 with the Boston Braves, was also a decent one as he put up an ERA of 2.98 in 136 innings. However, as this was the Deadball Era, those ERA's were below average: in his 7 major league seasons, he never had an ERA+ of 100 or more, and never had a winning record either.

He settled down in Sacramento, CA after his playing career and died there in 1963, aged 70.