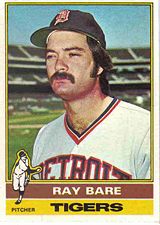 Pitcher Ray Bare made his major league debut with the St. Louis Cardinals in 1972, appearing in 14 games out of the bullpen and allowing just one earned run. He spent most of the next two seasons with the Tulsa Oilers of the American Association, going 12-4 with a league-best 2.34 ERA in 1974. Prior to the 1975 season, he was selected off waivers by the Detroit Tigers, where he was a part of the team's rotation for the next two years. Bare died of leukemia in 1994 at age 44.