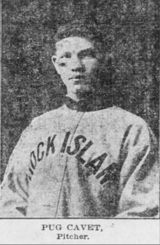 " 'Pug' Cavet... is graceful and athletic... He is already showing a terrific turn of speed. His fast ball has a neat little hop at the finish and his curve ball is a delight." - Sporting Life, March 18, 1911, about the 21-year-old Pug Cavet

This manager's article is missing a managerial chart. To make this person's article more complete, one should be added.
Retrieved from "https://www.baseball-reference.com/bpv/index.php?title=Pug_Cavet&oldid=1142204"
Categories: