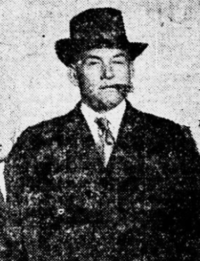 Otto Borchert was the owner of the Milwaukee Brewers minor league team. Borchert Field was named in his honor.

His father Frederick Borchert was an immigrant from Germany and founded the F. Borchert and Sons brewery in Milwaukee, WI, which eventually was bought out by the still existing Pabst Brewery. Otto began his relationship with baseball as a peanut vendor at minor league baseball games as a teenager. He left school at 14 to join the business world. He was a natural salesman, eventually hooking up with a local electronic company and started making a killing in buying and selling electrical properties. By the 1890s, he was a prosperous man featured in the city's society pages.

He became co-owner of the Cream City Athletic Club and began working as a boxing promoter, although his first love was baseball, which he had played on company teams while making his way in the business world. In 1920, he was the main investor in a syndicate that bought the Brewers, who were playing in the American Association, from Clarence "Pants" Rowland and Hugh Brennan for $100,000. As a result, he was named President of the club. For the first couple of seasons, he clashed with other stockholders and with manager Jack Egan. In 1922, he brought back Harry Clark, who had previously held the position from 1913 to 1916, to manage the team, but in four seasons, they did not finish above fourth place. During that time Borchert bought out the other stockholders one by one and became the sole owner in 1926.

He died in 1927, a day after the Brewers' home opener, when he suffered a heart attack while making a public address at the Elks Club in Milwaukee. He never owned a league champion, but attendance was good and he turned a profit every season. His widow inherited the ball club, and in 1928 sold it to Henry Killilea. Killilea decided to rename Athletic Park in Borchert's honor, a name it would retain until it was replaced by Milwaukee County Stadium in 1953.