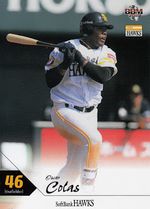 Oscar Colás has played in Cuba and Japan.

Oscar was a late cut for Cuba in the 2019 Premier 12, replaced by Yurisbel Gracial. He defected from Cuba in early 2020. [4] The hype claimed he was the Cuban Shohei Ohtani; to compare the two, at age 21, Ohtani had won one Pacific League MVP and been third once and been the league's top starting pitcher and top slugger while Colás only had a cup of coffee in the PL and had not pitched in his three years in Japan or his season in Cuba's top league.