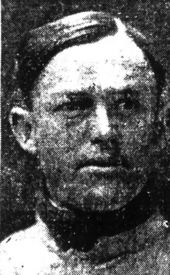 Oran Dodd was a minor league outfielder for several seasons. He served in the Army during World War I. He was said to have possessed the greatest arm in baseball at the height of his career and played for several seasons with various Texas League teams and in the Three-I League. He also had two trials in spring training with the St. Louis Browns in the American League. His last professional engagement was with Paris, TX, where he became well known and liked by residents of Lamar County. He then took to raising stock and farming near Newport, AR. He received poison gas injuries in WWI that eventually contributed to his death. He died at age 39 at the Gray Sanitarium in Newport from pneumonia followed by a bout of influenza. He is buried at Bluff Cemetery in Newport, AR.