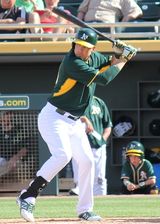 Infielder Niuman Romero was signed by Luis Aponte as a non-drafted free agent for the Cleveland Indians on November 20, 2002 when he was 17 years old.

Romero saw action in the Dominican Summer League during the 2004 campaign where he hit .258 with 39 RBI, 4 triples, and 2 homers in 66 games. He also played for the Caribes de Anzoátegui in the Venezuelan Winter League starting in September.

For 2006, Niuman moved up to the Lake County Captains in the South Atlantic League. He saw more playing time, getting into 114 games, but his batting average dropped to .228. At one point in late June and early July, he went 0 for 25. Romero drove in 36 runs in 412 at-bats for the season. He did not fare any better in the Venezuelan Winter League, hitting just .156 (5 for 32) for the Caribes.

In 2007, Romero split his time with the Captains and the Kinston Indians of the Carolina League. He managed to do much better with the "High A" K-Tribe than he did with "Low A" Lake County. With the Captains, Romero hit just .209 with a .288 slugging percentage. In his 12 games at Kinston, he hit .350 and brought his slugging percentage up to .400. He had a combined record of 12 doubles, 2 triples, 1 home run, and 48 walks with 30 RBI and a .231 batting average for the year.

Romero spent all of 2008 with Kinston and hit a solid .296 with 22 doubles, 6 home runs, 53 RBI, 10 stolen bases, and 64 runs scored. All of these numbers were career highs for Niuman. The highlight of the season was a 21-game hitting streak - the Carolina League's longest streak of the season. He was named the Indians' Minor League Player of the Week for the week ending July 16, and he earned a spot on the Carolina League All-Star squad. On April 11th, he also saw some action on the mound for the first time. In mop-up work against the Potomac Nationals, Romero threw 1 1/3 inning to finish up a blowout. He walked 1 and gave up 2 hits and 1 earned run for a 6.75 career ERA. At the end of the season, Romero was awarded the K-Tribe's Overcoming Adversity Award and he was also named as a Carolina League Post-Season All-Star.

During the winter, Romero spent some more time with the Caribes in the Venezuelan Winter League. In 36 games, he hit .276 and had a .353 on-base-percentage.

As a fielder, Romero has played all over the infield. Earler in his career he was used much more as a shortstop, but in Kinston he has spent a majority of his time at second. His fielding percentage at second from 2006 to 2008 was .990 while he had a .964 percentage at short over the same time span.