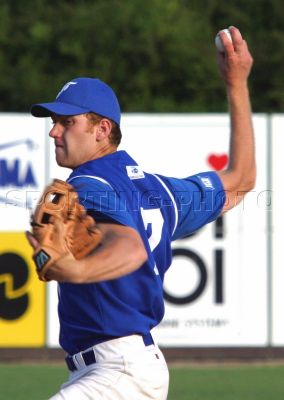 Nicolas Dubaut has played ball with the Rouen Huskies and the Paris Université Club in Division Elite, as well as playing for the French National team. In the 2002 World University Championship, Dubaut was 0-1 with a 2.45 ERA for France. He retired only two batters in the 2003 European Championship, allowing 4 runs, 3 walks, a hit and two wild pitches in a wild stint and had the worst ERA for France. In the 2003 Baseball World Cup, he surrendered 12 runs on 9 hits and 6 walks in 5 innings; his 14.40 ERA was about average for France and he went 0-1. He was 1-0 with a 4.82 ERA in the 2005 European Championship despite 8 walks in 9 1/3 IP. Dubaut went 2-0 with a 0.44 ERA in the 2007 European Championship. Against the Italian national team, he allowed one run in 6 2/3 innings in a major upset win. He then tossed 7 shutout innings to beat the Swedish national team.

After spending three years with the Rouen Huskies, Dubaut returned to the Paris Université Club in January 2010.

His father Emmanuel Dubaut and uncle Olivier Dubaut both played for the French national team as well.