Note: This page is for 1960s pitcher Mike Lee; for the minor league pitcher with the same name, click here. 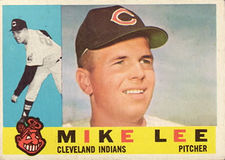 Pitcher Mike Lee was the first player ever selected under the short-lived First-Year Player Draft that lasted from 1959 to 1964. He was chosen by the Cleveland Indians in 1959, after his first professional season, and spent the entire 1960 season with the team, only pitching 9 innings in 7 games. He was the youngest player in the American League that year.