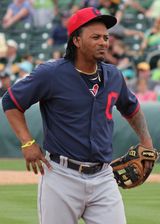 He was selected by the Philadelphia Phillies from the Nationals in the 2010 Rule V Draft and made the team out of spring training in 2011. Unlike many Rule V draftees, he got meaningful playing time and showed promise, even though his batting average was only .196 in 88 games. He played 6 different positions (all three outfield spots, as well as second base, third base and shortstop), fielding each one well; he showed a bit of power with 10 extra-base hits in 209 at-bats and stole three bases without being caught. While his OPS+ was well below average at 48, the Phillies had not expected much from his bat since he should have been playing in AA or AAA under normal circumstances, and not in the majors. The extensive playing time he received with a very strong team was a signal of the high regard in which he was held. In 2012, he suffered a major setback when he broke his foot in spring training, being hit by a pitch from Baltimore Orioles reliever Jim Johnson on March 20th. It was particularly damaging since there was an open spot for him to claim in the line-up at second base, because Chase Utley was out of action with tendinitis in his knees.

He first joined the Cleveland Indians in 2015, and also played part of the next two seasons with the Indians as a utility player, also seeing time with the Boston Red Sox in 2016 and the Tampa Bay Rays in 2017. That year, he started the year with the Indians, moved to Tampa for a month, and then returned to Cleveland to finish the year. In the 2016 World Series, he made the final out of Game 7, grounding out to third baseman Kris Bryant of the Chicago Cubs in the bottom of the 10th with the potential tying run on base. However, he did not see any action in the 2017 postseason.

In January 2018, he tore his Achilles tendon during a workout in the Dominican Republic. This meant that he would be out of action for at least six months, and at age 35, it was not clear whether he would be able to come back to the majors even if he recovered fully. Indeed, the injury marked the end of his major league career.