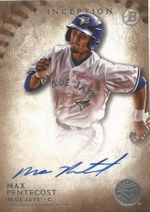 Catcher Max Pentecost was the 11th player selected in the 2014 amateur draft, by the Toronto Blue Jays and scout Mike Tidick, with a compensation pick awarded for the Jays' failure to sign 2013 first rounder Phillip Bickford. He had originally been drafted in the 7th round in 2011 by the Texas Rangers out of high school, but decided to attend college instead. He was a star at Kennesaw State University, hitting .422/.482/.627 with 9 homers and 61 RBIs in his third season in 2014. He was voted the winner of the Johnny Bench Award as the top college catcher in the country after the season.

Pentecost signed quickly with the Blue Jays after being drafted and was assigned to the GCL Blue Jays to start off. He quickly proved he was too good for that level, hitting .364 in 6 games before getting a promotion to the Vancouver Canadians of the Northwest League on July 13th. He hit .313 in 19 games for Vancouver, for an overall batting line of .324/.30/.419. He then missed all of 2015 with a shoulder injury.