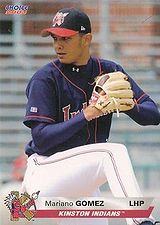 Mariano Gomez, as of July 2009, has a shot at being the second major leaguer from Honduras, following Gerald Young. Gomez is a cousin of Orlando Castro.

The left-hander made major strides in 2002. Assigned to the Columbus RedStixx, he turned in a 8-2, 2.75 record with one save. He would have been 9th in the South Atlantic League in ERA had he qualified. The tall left-hander turned in a solid season with the 2003 Kinston Indians, going 6-4 with a 3.67 ERA in 18 starts but was sidelined in late July with left wrist tendonitis, ending his campaign.

Nagged by a partial torn ligament in his finger, Gomez only pitched 8 games in 2004, tossing two shutout innings for Mahoning Valley and going 0-1 with a 5.31 ERA for the Akron Aeros.

The veteran left-hander signed with the Minnesota Twins chain for 2008. He made it to AAA that season with the Rochester Red Wings, turning in a good campaign. He went 5-2 with a save and a 2.76 ERA in 54 games. He led the club in appearances and was second to Anthony Swarzak in ERA.

For 2009, Gomez signed with the Atlanta Braves. He had a 2.22 ERA after his first 31 games for their Gwinnett Braves affiliate.