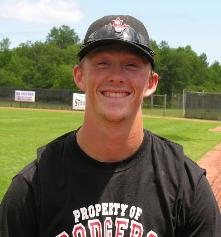 Outfielder Marcus Knecht was selected as the 113th pick of the Toronto Blue Jays in the 2010 amateur draft.

In high school in Toronto, he lettered all four years at St. Michael's College School, where he also played hockey.

Knecht has also played for Team Canada in the Junior World Championships in 2008.

Knecht was assigned to the Auburn Doubledays. He debuted as a pro on June 18 against Batavia, going 1 for 5 with two runs.