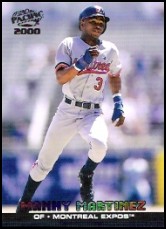 Manny Martinez played three years in the majors, appearing with four different teams. He was the regular centerfielder for the Montreal Expos in 1999, playing alongside right fielder Vladimir Guerrero.

Manny also played 14 seasons in the minors, including some seasons in Mexico. He played in the Mexican League in class AAA through 2008, after which his professional career ceased.