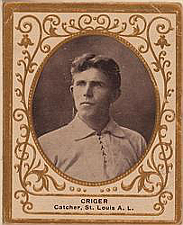 “Criger is the man who can turn back the fleetest base runner, a man who can nip the boys at first and third unless they are ever on the alert. Criger is the backstop that never drops a ball that he can reach, and who can throw harder and quicker to second than any catcher in the profession... I would like to see some one pick out the equal of Criger.” - Tim Murnane 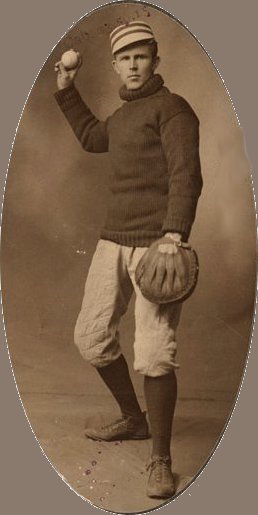 Lou Criger was a tall but very light catcher who is best known as Cy Young's favorite battery mate. Because of his light frame, many opposing players thought they could bowl him over easily, but he was in fact very tough and not afraid of any man. His major asset was a powerful and accurate throwing arm, which he used to cut down the running game at the height of the Deadball Era, and a knack for calling pitches. His hitting was always barely passable at most, as attested by his career .221 batting average.

After playing amateur ball for a number of years in his hometown of Elkhart, IN, Criger signed his first pro contract in 1895 with the Kalamazoo Kazoos of the Michigan State League. He joined the National League's Cleveland Spiders at the end of the following season and began 1897 as the team's third-string catcher. On June 22, he gunned down six Louisville baserunners trying to steal, on his way to earning the team's regular catching job. That is also when he began teaming up with pitching great Cy Young, who thereafter insisted that Criger be his catcher. The two moved together to the St. Louis Perfectos in 1899, and jumped together to the new Boston franchise in the American League in 1901.

Lou remained in Boston for eight seasons and was Young's catcher for twelve years, during which he won 283 games. It was hard work catching the hard-throwing right-hander, but Criger complemented Young's natural talent with a thorough knowledge of the opposition and pitching strategy, in addition to his great throwing arm. Young later said that he had such confidence in his teammate's judgment that he never shook off one of his signs. Criger caught Cy's perfect game on May 5, 1904 and another no-hitter on June 30, 1908. He caught all eight games of the inaugural 1903 World Series for Boston, and later revealed that he had turned down an offer of $12,000 from a gambler to call "soft pitches" during the Series.

Criger finished his career by playing one season for the St. Louis Browns in 1909, when he hit .170. He played another 27 games for the 1910 New York Highlanders, ending his major league career. He played a few more seasons in the minor leagues, including a stint as player-manager for Boyne City of the Michigan State League in 1911. He was then the Browns pitching coach in 1912, catching one game as an emergency injury replacement. He developed tuberculosis in 1914 and moved to Arizona, where he died in 1934.

Lou's brother, Elmer, pitched in the minor leagues in the first decade of the 20th century, making it all the way to Los Angeles Angels of the Pacific Coast League. His son, Rollo, also a catcher, was signed by the St. Louis Cardinals in 1920 but never appeared in a game. Lou was inducted into the Indiana Baseball Hall of Fame in 2004.