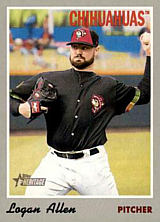 Pitcher Logan Allen was drafted by the Boston Red Sox in the 8th round of the 2015 amateur draft and made his professional debut that year with the GCL Red Sox. He was promoted to the Lowell Spinners after 7 games, pitching a total of 8 games, all as a starter, with no record and an ERA of 1.11 in 24 1/3 innings. On November 13th, he was traded to the San Diego Padres along with fellow prospects Carlos Asuaje, Javy Guerra and Manuel Margot in return for closer Craig Kimbrel.

He is a good friend of professional wrestler John Cena; the two met accidentally at a steakhouse in Tampa, FL when Allen was still pitching in the minor leagues. Cena was present at Petco Park for Logan's major league debut with the Padres on June 18, 2019. It was a good day for Logan as he pitched 7 scoreless innings to defeat the Milwaukee Brewers, 4-1. After the game, Cena handed him $1, the result of a bet he made with him that day in Tampa, when, as a form of motivation for his new friend, he had bet him he would never make the Show. "If I lose, when you make it to the major leagues, I will come and personally pay you one dollar on the mound at a San Diego Padres game," the wrestler had posted on social media at the time. He went 2-3, 6.75 in 8 games, including 4 starts, then on July 30th he was involved in a major three-team trade also featuring the Cincinnati Reds that saw him join the Cleveland Indians. The biggest names in that trade were pitcher Trevor Bauer and outfielders Yasiel Puig and Franmil Reyes.

While he was on the Indians' 40-man roster in 2020, the Indians drafted another pitcher named Logan Allen in the 2nd round of the 2020 amateur draft. His namesake is also a lefthander, from Florida International University.