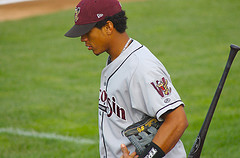 Infielder Leury Bonilla was signed by the Seattle Mariners organization in 2002 as a 17 year old and played three seasons in the Dominican Summer League. In 2004, he hit .266 and led his team with 24 steals.