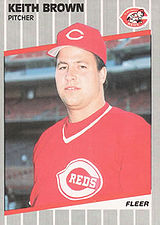 Keith Brown was briefly a member of the 1990 World Series Champion Cincinnati Reds, making 8 appearances with a 4.76 ERA. One year after (ultimately) his final big league appearance, Brown was diagnosed with non-Hodgkin's lymphoma and missed all of the following season. He came back to pitch 4 games in Triple A in 1995, ending his career. In 25 big league appearances, his ERA was 3.40.

Keith is now a coach at the Nashville Baseball Training Academy. His brother, Ray L. Brown, was a star in the minor leagues.