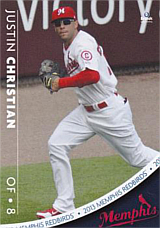 Justin Christian was undrafted out of college and signed with the independent River City Rascals in 2003. He played parts of two seasons for the Rascals, hitting .374 with 45 steals in 68 games, before the New York Yankees signed him to fill a roster spot on the Staten Island Yankees in 2004. The roster filler eventually appeared in 76 games across parts of three seasons in the big leagues, predominantly with the San Francisco Giants, hitting .203.