Note: This page is for 1960s pitcher John Wyatt; for minor leaguers of the same name, click here. 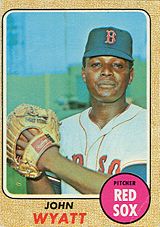 John Wyatt missed the 1957 and 1958 seasons due to military service.

Wyatt holds the all-time single-season record for most home runs given up by a relief pitcher. For the Kansas City A's in 1964, he gave up 23 homers while making no starts. No other pitcher has ever given up at least 20 home runs while making three starts or fewer.