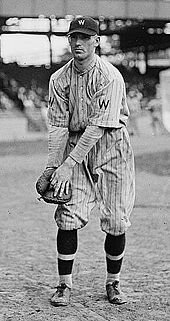 Virtually all of his playing time was with the Chicago Cubs from 1921 to 1923. He played all the infield positions (more third base than the others, though), and while he hit over .300 twice, he did so on a team that was hitting around .290.

The Cubs at the time went through three different starting third basemen: Charlie Deal in 1921, Marty Krug in 1922, and Bernie Friberg in 1923. John was the backup each year, and played other positions in the infield as well.