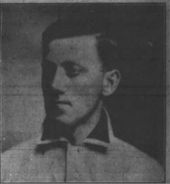 John Frill had a late start in pro ball before coming up with the pennant-contending New York Highlanders in 1910, for whom he won a couple of games.

John joined the Army in 1901 and reenlisted in 1905. He had been a tin smith but in the Army spent his time constructing artillery pieces. After his time in the Army, he began in pro ball. In all, he played ten seasons in major and minor league ball.

The Sporting Life issue of April 1, 1911 has a photo of John Frill and indicates that he played for Jersey City, Newark and East Liverpool, and was the star pitcher for Newark in 1909. The newspaper apparently didn't know about the teams John pitched for in 1906, when he first started out, the Springfield Ponies and the Bridgeport Orators.

One of the sources: Biography of John Frill.