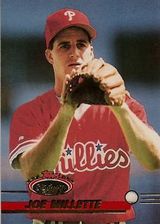 When shortstop Joe Millette was undrafted out of college, he attended a tryout camp in San Francisco, CA. He wasn't signed out of the camp, but a Philadelphia Phillies scout mentioned another camp the following week in Los Angeles, CA. There, another Phillies scout liked his defense and arm, but the team didn't have a job for him. Millette took a job with Chevron Oil Company and waited for a call from the team. Finally, in September 1988, he signed a contract with the Phillies. He received a $500 signing bonus and left a job that paid more money than he'd make until his promotion to the major leagues at the 1992 All-Star break.