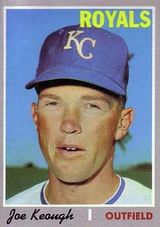 Joe Keough played six seasons in the major leagues. His best season was 1970 when he hit .322 in 183 at-bats with the Kansas City Royals.

He is the brother of Marty Keough and Tom Keough, and the uncle of Matt Keough.

He hit a home run in his first major league at bat on August 7, 1968 as a member of the Oakland A's against the New York Yankees. Lindy McDaniel was the pitcher.

He also had the first game-winning hit for the new Kansas City Royals in 1969.

Keough played winter ball in Venezuela during the winter of 1972-73. He worked in marketing and real estate development for a number of large corporations after his retirement from baseball, including 7-Eleven, Burger King, Payless ShoeSource and EyeMasters.