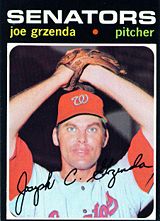 Lefty Joe Grzenda pitched for 6 big league teams in 8 seasons, posting a very respectable 14-13 record with a 4.00 ERA. His busiest years were with the Washington Senators in 1970 and 1971. He was the last pitcher in the history of the Washington Senators, as he was on the mound in the 9th inning on September 30, 1971, trying to close a 7-5 win over the New York Yankees, when fans at RFK Stadium stormed the field with two outs, ending the game, which was forfeited to the Yankees as a result. Fans were upset that the Senators were being relocated to the Dallas/Fort Worth area after the season.

He is not the only major leaguer whose last name starts "Grz", as there is also Mike Grzanich.