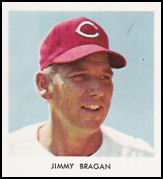 He attended Mississippi State University and graduated with a degree in education then was a minor league player from 1950 to 1957. A second baseman, he had his best year with Columbia in 1955, batting 308 with 25 doubles, 99 runs scored and 51 RBI in 131 games.

He managed the Bluefield Dodgers 1957, guiding them to an outstanding record of 47-20, then was a scout for the Cincinnati Reds from 1958 to 1966. He was promoted to coach with the Reds from 1967 to 1969, under manager Dave Bristol, and lost his job when Bristol was fired. He became the first base coach of the Montreal Expos from 1970 to 1972, taking the job Bristol was supposed to occupy before he was named manager of the Seattle Pilots - who shortly thereafter became the Milwaukee Brewers - in 1970. In mid-season 1971, he was appointed interim manager of the Winnipeg Whips (AAA International League) after Clyde McCullough stepped down in mid-season. In 1973, he was a scout for the Expos, leaving the major league coaching staff to allow his good friend Bristol to take his place.

Bragan was assistant baseball coach at Mississippi State University in 1974 and head coach the following year. In 1976 and 1977, he was a coach with the Milwaukee Brewers, then in 1978 managed the AA Chattanooga Lookouts of the Southern League. He was a scout for the Cleveland Indians from 1978 to 1980, then was appointed president of the AA Southern League and held the job for 14 years.