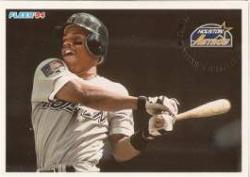 Outfielder James Mouton was selected by the Houston Astros in the 7th Round of the 1991 amateur draft. He moved to second base and in 1993, after two seasons in Single-A, Mouton was named the AAA Pacific Coast League MVP. He led the league with 126 runs, 172 hits, 42 doubles, and 286 total bases. Baseball America named him the Astros #8 prospect prior to, and #6 following the season.

In 2011, Mouton was an Area Scout (southeast TX, LA) for the Arizona Diamondbacks.