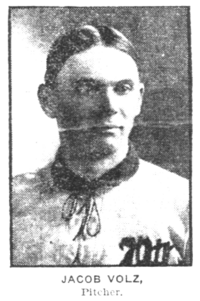 "None of the pitchers in that league did any better work than this man last season." - Billy Hamilton, player-manager for Haverhill in 1904, about Jake Volz of Manchester

Silent Jake Volz was in eleven major league games, spread out over 1901, 1905, and 1908. He was in the American League in its first season as a major league, but was disabled for quite a while with tendinitis.