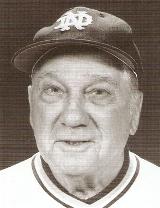 "Jake" Kline began his playing career for Notre Dame in 1915 and earned three monograms while hitting .300 each year and captaining the 1917 squad. He still shares the team record with three home runs in a game. Kline returned as the Irish freshman baseball coach in 1931, after spending time in World War I and in various baseball leagues.

When the Irish baseball team moved to Eck Stadium in 1994, Kline's name moved as well. The official title of the playing surface is Jake Kline Field at Frank Eck Stadium.