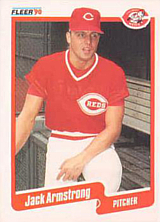 Pitcher Jack Armstrong was signed as a 1st round pick in the 1987 amateur draft by the Cincinnati Reds and scout Chuck LaMar. Before the All-Star break in 1990, he was 11-3 with the Reds. He was subsequently named the starting pitcher in the All-Star Game, but only won one more game the rest of the season against six losses. By the time the postseason rolled around, he had been bounced from the starting rotation. He did make one appearance in the 1990 World Series, pitching 3 innings of one-hit relief in Game 2, which the Reds won in 10 innings. He was later selected by the Florida Marlins in the 1992 Expansion Draft and finished his big league career the following season. Jack threw a low-90s fastball, a curve and a slider.