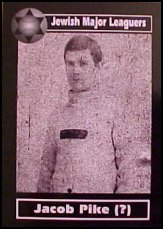 Israel Pike, long identified as Jay Pike was considered a major enigma. SABR wrote a biography of him indicating that much about his life was uncertain. It was known that he had played for the 1877 Hartford Dark Blues (who were based in Brooklyn, NY) and was the brother of star Lip Pike, but the historical references were not clear.

Some sources listed the so-called Jay Pike's full name as "Jacob Emanuel Pike", but there was no reliable source for that information. It was known from census records that Lip Pike had a number of brothers: Boaz (born circa 1842), Israel (1854), Solomon (1855) and Charly (1859); Lipman, was born in 1845. Both Lipman and Boaz were amateur players starting as early as 1865. Boaz, while apparently a prodigious hitter, was old enough that he retired instead of playing in the new National Association in 1871, while Lip went on to become a big star. For his part, Israel, who was younger, played for various clubs that were not part of the National Association. Brooklyn city directories from the late 1880s list the following persons living at the same address: Jane Pike (the brothers' mother), Boaz, Israel, and J. Pike, while J. Pike is again listed by newspapers among the attendees at Lip Pike's funeral in 1893. That would have made it seem as though the enigmatic "Jay" was one of the family's two youngest brothers (and not Israel, as had previously been surmised), but the evidence was not conclusive.

In 2011, researcher Peter Morris solved the mystery and conclusively identified Jay as Israel Pike. The source of the mistake was the original boxscore for the game of August 27, 1877 which was misread as listing a J Pike, when it fact indicated I Pike as the mystery player; the two initial letters can look very similar in old print. In its account of the game, the New York Clipper lists the player as "Pike's brother, formerly of the Concords". There was a "Pike" playing for the Lowell Concords in 1875, and his teammate Curry Foley calls him Izzey Pike in an interview he gave a few years later.

When Israel appeared for Hartford in 1877, his brother Lip was playing for Cincinnati. He had also umpired one game in the National Association in 1875.