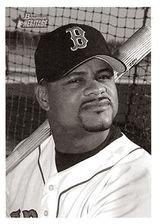 Israel Alcántara played parts of three big league seasons. He is best known for an incident in 2001, when, batting for the Triple A Pawtucket Red Sox, he karate kicked Scranton/Wilkes-Barre Red Barons catcher Jeremy Salazar after pitcher Blas Cedeno hit him with a pitch. He proceeded to rush the mound, but was tackled by infielder Kevin Orie before getting too far. The International League suspended Alcantara a mere six games for his conduct. Despite hitting only 6 home runs in the majors, Alcántara blasted 287 in a 15-year minor league career, with as many as 36 in a season. As a big leaguer, he primarily wore number 55. Alcántara became a coach for the Jupiter Hammerheads in 2015, DSL Diamondbacks 2 in 2016-2017, and DSL Diamondbacks 1 in 2019.