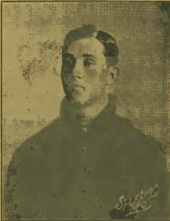 He was the father of Dick Wakefield. Another son, Bob Wakefield, played minor league ball.

The book Baseball's Biggest Blunder: The Bonus Rule of 1953-57 discusses the bonus that his son Dick received and in passing states that Howard was the top pinch-hitter of 1906.

As a 21-year-old youngster, Wakefield played for Des Moines under player-manager Herman Long, who had been one of the great 19th Century stars.

He was featured on p. 1 of the Sporting Life issue of Sept. 21, 1907, with his likeness. The feature said he had "exceeding promise". He played in the Cleveland City League for several years before coming to the minors. He was said to have been a big factor in Des Moines winning the championship in 1905.