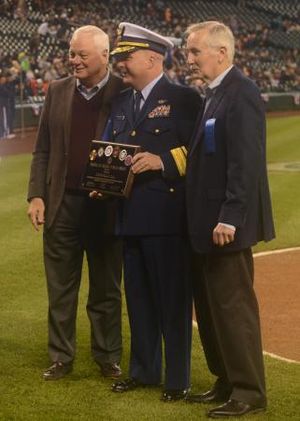 Lincoln (on the right) with a Navy sailor in 2013. Seattle Mariners executive Chuck Armstrong is on the left.

Howard Lincoln is Chairman and Chief Executive Officer of Nintendo of America, which was the majority owner of the Seattle Mariners through a company known as First Avenue Entertainment LLLP. Lincoln represented the Mariners' owners starting in 2004 after principal owner Hiroshi Yamauchi's shares of the team were transferred to Nintendo of America.

On April 27, 2016, Lincoln announced his retirement while Nintendo of America stated its intention to sell its majority ownership shares to minority owners in a concurrent move. John Stanton, one of 17 minority owners, was named Lincoln's successor as CEO. While the shares changed ownership, the corporate entity which officially owns the team remained the same.

After graduating from law school, Lincoln served in the United States Navy as a lieutenant in the Judge Advocate General's Corps from 1966 to 1970 before going into private practice. He worked for the Nintendo Corporation on a high profile case beginning in 1981, then was hired as Senior Vice President and General Counsel in 1983. He was elected chairman in 1994.