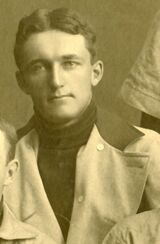 The son of a successful Nebraska merchant, Henry Clarke was a well-educated young man who was athletic enough to play a little major league baseball before the turn of the 20th century. While on summer break from college and law school, he pitched six games and played three more in the outfield for the Cleveland Spiders (1897) and Chicago Orphans (1898). Clarke then returned to the Cornhusker State, where he was a prominent attorney, public servant, and businessman.