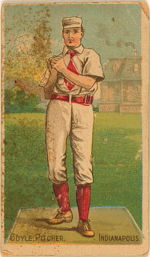 Before coming to the majors, Henry played primarily first base for the 1883 Reading Actives and had the highest batting average on the team. He also managed for part of the season. He continued to play for Reading as a first baseman in part of 1884, hitting reasonably well again, but spent much of the season with the St. Louis team in the 1884 Union Association, in the only year of the Association's existence. While the Association didn't survive, the St. Louis Maroons played the next season in the 1885 National League and Boyle stayed with them.

Henry Boyle was a contemporary of Jack Boyle, who played for the St. Louis team in the American Association.